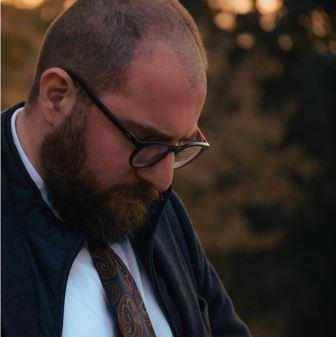 Mohammad H. Javaheri (1989-) is an Iranian Composer, was born and raised in Tehran. In 2019, he was named as “a composer we will surely still hear from in the future” (NMZ newspaper, Germany), and has been highlighted in several published news articles and websites including the LA Times. Along with a temptation for exploring and combining various musical languages across his body of work, Mohammad’s music has been described as ‘tense’, ‘sensational’, ‘detailistic’, and ‘soulful’, and he inherently crafts his ‘own sound’ (Toshio Hosokawa, SYNTHETIS 2019). His work finds expression across a range of forms, with or without/only electronics. As a sought-after composer, he has been invited around the world to present his works, working with well-known artists, ensembles and institutes on a regular basis.

He is currently a composer at via nova – zeitgenössische Musik in Thüringen e. V. and also a composer member of DKV, DEFKOM, and FEM (German Composers Association, German Film Composers Union and Department of E-Music). He has given seminars on “Blocked Form and Transformation/Necessity of Establishing Digital Orchestras in 21st Century” at Bilkent University and at SYNTHETIS 2019, Poland; he has been a guest speaker on “Transcultural Music” at Hochschule für Musik Franz Liszt Weimar; and is an invited guest composer/lecturer at Nagoya College of Music in Japan and University of Art-Tehran in Iran, in 2021. His scores have been published in France and the USA by BabelScores and UCLA library (Contemporary Music Score Collection), respectively. Moreover, several of his compositions will be published by “Petrichor Records” in the USA.

Mohammad’s first composition “Unbounded Scream” for solo oboe (2016) received its world premiere in Germany. It was later selected for a performance by the Kaleidoscope Chamber Orchestra in Los Angeles from over 2200 compositions in over 90 countries. Since then, Mohammad has been commissioned and performed by a variety of performers, ensembles, and orchestras, with performances in Iran, Turkey, Uzbekistan, Germany, Poland and the USA; for festivals and events such as Weimar Spring days Festivals for New Music, Transcultural Music Concert and the Bauhaus 100th Anniversary.

Prior to his compositional output, Mohammad completed his first degree in Computer Software, whilst also studying at Tehran Conservatory, playing flute in its orchestra in 2009. He then completed a bachelor’s degree in Setar performance: Iranian Music Performance at Tehran University of Art in 2015. During this time, he worked as a piano instructor at Tehran Conservatory and composed music for several Iranian TV series. He performed as a Bass Singer in Tehran Choir’s, as well as a Setarist and Flutist in orchestras, performing in venues such as ZKM Next Generation 8:0, SeaM Studio, and Tehran Vahdat Concert Hall with the conductor Alexander Rahbari.

In 2017, he started his master’s degree in Contemporary Composition at Bilkent University Turkey, in order to study under the supervision of Asst. Prof. Dr. Tolga Yayalar. Mohammad’s pieces were performed in several festivals in Turkey such as “Bilkent Brassfest’18” and “Sesin Yolculuğu genç besteciler festivali 2017 & 2018”. In 2018, he was awarded the Erasmus+ scholarship to study at Hochschule für Musik Franz Liszt Weimar Germany under the supervision of Dr. Ulrich Kreppein, and received additional scholarships from HfM Weimar. He was accepted to extend his studies to three semesters in order to complete the second half of his master’s there. Whilst studying in Weimar, a newspaper highlighted his achievements: “Mohammad Javaheri starts a professional life with lightning success …  A composition student from Weimar is in Demand WorldWide”. At both universities, Mohammad encountered electroacoustic music, with Tolga Yayalar and Robin Minard, which he has since developed into his approaches in composition and also collaboration.

Since 2018, Mohammad has worked with numerous performers, ensembles, and orchestras such as Carin Levine, Marianna Schürmann, Ivan Bushuev, Ravshan Tukhtamishev, Alexandra Demowska-Madejska, Wojciech Psiuk, SWR Symphony Orchestra, MDR Symphony Orchestra, Digital Bauhaus Orchestra, Radiofm. Bauhaus, De Musique Expérimentale Du Bauhaus, MISE-EN, Adapter, Cikada, Omnibus, Hezarfen, Loadbang, XX. Jahrhundert, and NeoQuartet; in cities including St. Petersburg, Arnstadt, Weimar, Leipzig, Stuttgart, Berlin, Karlsruhe, Ankara, Istanbul, Tashkent, Radziowidjce Castle/Warsaw, Gdańsk, Los Angeles, and New York. From his compositions for SWR Symphony Orchestra and Ensemble Omnibus, he was interviewed on SWR and MDR Radio respectively regarding his compositional activities and interests. In 2019, he was selected as a featured composer of the MISE-EN New York Festival in the USA, BCA19 Academy in Turkey, SYNTHETIS Academy in Poland, NeoArte Festival 2021 in Poland, SWR Orchestra workshop in Germany as well as Kaleidoscope in the USA, Weimarer Frühjahrstage für zeitgenössische Musik (2019 & 2020). In 2020, his orchestral piece “De Novo Remutations” was broadcast on the SWR2 radio station, and “Devenir fou par amour (Sheid/V2)” for ensemble was invited to be broadcast on NeoArt Festival 2020 in Gdańsk, Poland. He was selected for the 2nd round of New Classics Competition by Moscow Conservatory, and was awarded the 3rd prize in Gilgamesh International Composition Competition, 2nd Prize in the 20th International Chamber Music Composition Competition in Germany, and winner of the Public Prize in the same competition.

Unison | 2019 |
(The Distance Between Me and My..Self Recomposed) | for Viola and Tenor Sax (Aleksandra Demowska-Madejska and Wojciech Psiuk) / Approx. 5 min